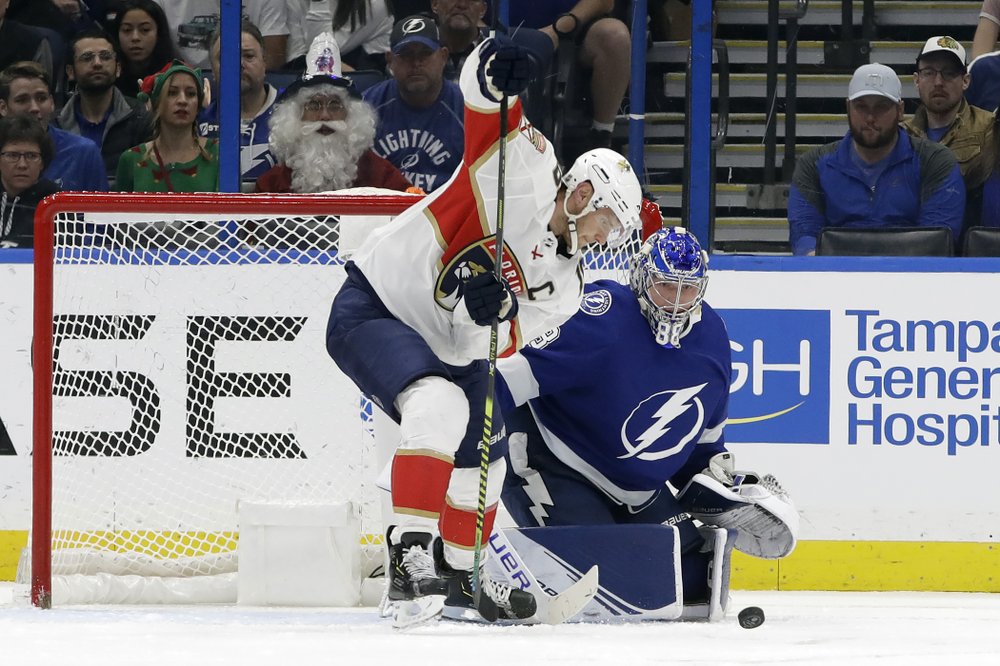 It’s still no man’s land in front of NHL goaltenders, a forbidden place for offensive players who risk hard shoves, cross-checks — or worse — when they settle in.

But it isn’t nearly as rough and tumbles as it used to be.

The league has cracked down on the over-the-top physical play in general and that includes going after players who park themselves in front of the net in hopes of blocking a goalie’s view, tipping in a shot or sliding in a rebounding puck for a greasy goal.

The savage blows once seen on a nightly basis are now far more rare, certainly in the regular season.

“It has changed drastically,” San Jose Sharks defenseman Brent Burns said. “I think they’re trying to create more goals and that’s one way to try to do it. It’s a great place for forwards to go to make a big difference.”

James Neal is one of those players.

The Edmonton winger has scored 19 times this season, putting him on pace to approach his career-high of 40 goals. Neal honed his puck-tipping craft a lot last summer and it helps that he is surrounded by a lot of talent that opens up space on the ice.

Net-front play is critical in every NHL game simply because goalies tend to stop shots they can see. Interfere with their view, their concentration, and the pucks start going in. Tipping a fast-moving puck with a stick to change the trajectory of a shot is another way to score, and being in front of the net is the best place to employ that mix of skill and luck.

It’s up to defensemen to move opponents out of the way without drawing a penalty that could give the other team a power play.

This game within the game has evolved over the years.

Former Detroit forward Tomas Holmstrom, who is widely regarded as one of the game’s great net-front players, paid the price for his No. 1 role from 1996 to 2012. Holmstrom was hit with fists and sticks, sometimes both, as teams tried to get him off his spot in front of the crease.

“He got abused pretty good back in the day,” Red Wings goaltender Jimmy Howard recalled.

That didn’t stop him as he did the dirty work to help the franchise win four Stanley Cup championships.

“I grew up in Detroit and watched him for a long time,” Colorado defenseman Ian Cole said. “Not only was he so good at establishing that position, and holding that position, he was unbelievable at tipping the pucks. He was also really good at knowing when to let pucks go.”

Florida Panthers forward Aleksander Barkov is another player who makes a living in front of the net.

“He seems to get his stick on everything and he takes your eyes away,” Howard said.

In today’s game, it is difficult to defend the front of the net because physical play against someone without the puck often draws a penalty. Cole said the key is to try to prevent opponents from getting where they want to be.

“It’s really tough to move guys when they’re already there,” Cole said. “There are things you can do, but you’re probably going to 100% take a penalty. Just the way your skates are, you’re not going to be able to push guys sideways. They’re going to dig their edges in and not going to move. Then you start to push them forward and they rotate their foot and you can’t push them forward.”

Goalies, while the puck travels from stick to stick, stay on the move ever so slightly so that they can see what they’re trying to stop.

“As a goalie, our eyes are our everything,” Howard said. “If you see the puck, nine times out of 10 guys are going to stop it.”

And that’s easier said than done.

GAME OF THE WEEK

Edmonton at Calgary on Saturday night.

The battle of Alberta should be intriguing, matching up teams that may be competing for the rest of the season for the third and guaranteed playoff spot in the Pacific Division or a wild-card berth. The Flames beat the Oilers 5-1 two weeks ago on the road in their first five games.