OLYMPICS Olympic photos from far above — and underwater

Olympic photos from far above — and underwater

Those amazing shots: Olympians captured from above, an airborne view of the most challenging of competitions, from gymnastics to track. Divers descending gracefully. Swimmers cutting through the clear water, their faces etched with determination, caught mid-stroke by a camera meticulously set up at the bottom of the pool. 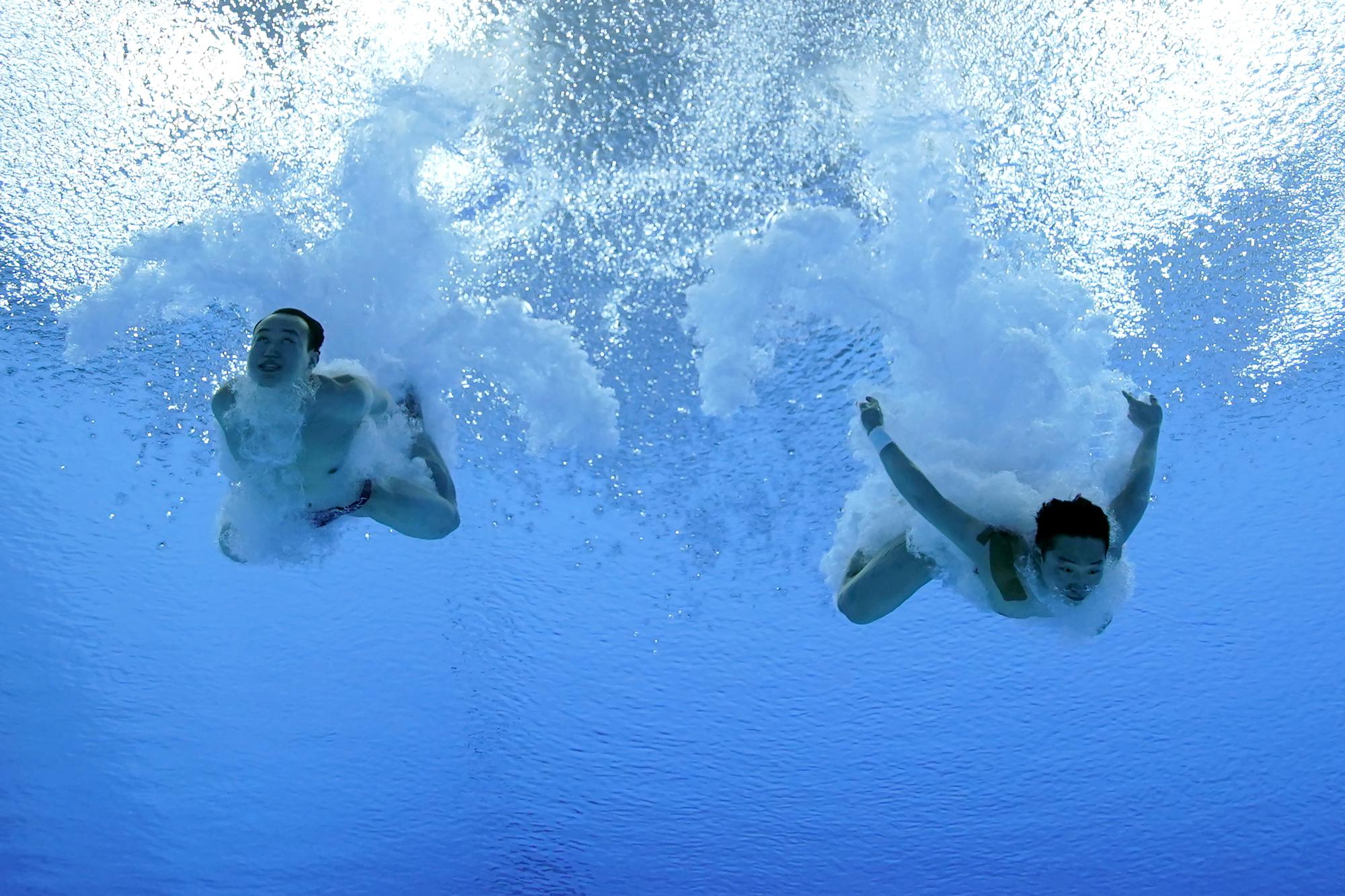 How does that get done, anyway? Are there actual photographers lying underwater, looking up? Are there multiple photojournalists wandering the catwalks at events? Is it robotics?

Since the London Games in 2012, The Associated Press has been using a combination of robotics, ingenuity and creativity to make memorable photos from difficult places. The intricate setup — reconnaissance begins months beforehand and setup takes place many weeks in advance — ensures that the world catches glimpses of Olympians in ways it might otherwise never see.

AP photojournalists David J. Phillip, Morry Gash, Chris Carlson and Jeff Roberson have made it their business to ensure AP can deliver these photos to the world from the Olympic Games. Here, Gash and Phillip, sitting at the Olympics' Main Press Center demonstrating their joystick-driven camera control, go behind the scenes to explain a bit about how it all works.

WHAT WERE THE BEGINNINGS OF THIS?

PHILLIP: In London, the original connection to the camera was a physical cable from wherever it was. We had everything wired together, it had to be a direct connection. And then it evolved to do being able to do it over a network. And now we're all the way up to where we can we can control every robotic we have from right here in the Main Press Center if we wanted. We could do it from anywhere in the world, really.

GASH: I'm doing it in a box, using a joystick. It's like a video game. Put two quarters in and go.

IS THERE A SPECIAL KIND OF CAMERA INSIDE THE ROBOTICS APPARATUS?

HOW ON EARTH DOES ALL THIS GET SET UP IN ADVANCE?

PHILLIP: So we come on world press briefings. And during that time, we tour all the catwalks and venues and talk about where we want trusses or where we're going to put things. And then we coordinate with the local Olympic Committee and the IOC. A lot of places we have to have riggers help us. Sometimes they're hanging out with nothing to stop them while they're mounting our cameras, our robotics, for us. Once we do that, then we develop a plan back in Houston and we start building everything so that we have everything in working order before we come here. So then we pack it all up and it all ships from Houston to wherever we're going.

CAN YOU MOVE AN UNDERWATER CAMERA ONCE IT'S DOWN THERE?

PHILLIP: We move it after each session. We kind of look ahead to see what's what's the next event and what who's swimming and what lane. And the IOC provides the divers that do that for us now. In the early days, we used to have to jump in and move it ourselves. But now they have somebody that does this. We just basically tell them where we want it and they move it for us. So if there's any issues, I could bring the camera out and we could make some adjustments. But we didn't have any issues this year.

WHAT SPORTS DO YOU THINK WORK BEST WITH THIS? WHAT RESULTS HAVE YOU BEEN HAPPIEST WITH?

GASH: It's been great for gymnastics. Some of the stuff from track has been great. I don't know if there's one specific sport that it's best for. It works in a lot of places.

PHILLIP: We concentrated on what we knew would produce more unique images that would last. So you know, weightlifting, boxing. Obviously the underwater is a must-have. It's just such a unique perspective. That's the advantage of the robotics — you can do so many different things. We can zoom, we can turn it, and we learned to pan as well.

GASH: The diving ones, I was doing that manually. But now for track, I can program it to run at the same speed that they're running, depending on which race, and I can change the speed. So almost every race, I can get a pan.

WHAT DO YOU LIKE MOST ABOUT THIS KIND OF PHOTOGRAPHY?

GASH: I just think it's unique. It's something you can't get otherwise. We're not allowed on the catwalks and can't shoot from them anyways, so it's just a totally different angle.

PHILLIP: It's definitely a unique perspective that that gives a better understanding about the complexity of the story. You can see it from all different angles and have a feeling for how and what it takes to do these sports. Morry's done a fantastic job of finding things and making things different. And the underwater has been my focus. But it takes a big team to make this work.

GASH: I love variety. So I like being able to go from gymnastics in the morning to track at night and do something totally different and figure it out each time.