Problems mount for Mourinho as Liverpool looks to add to woe 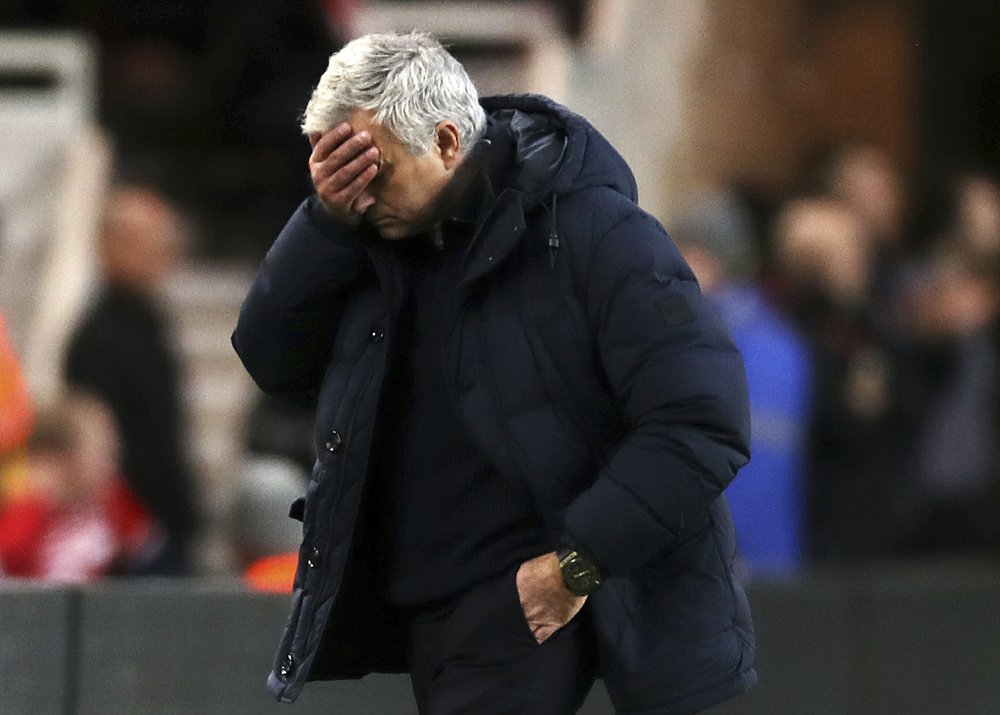 The “new-manager bounce” is over at Tottenham. In fact, things have gone rather flat under Jose Mourinho nearly two months since his high-profile arrival at the London club.

The Portuguese coach’s humble, meeker side, which he seemed eager to showcase upon joining Tottenham as the replacement for Mauricio Pochettino in November, appears to have disappeared.

Now we are seeing the real Mourinho.

A Mourinho who called an opposition coach an “idiot” during a Premier League game last week. A Mourinho who appeared to have a little dig at one of his own players, Tanguy Ndombele, for being “always injured.”

Frustration seems to be setting in, with the team having only won one of its last five games after starting life under Mourinho with four wins in his first five games.

“I really like this squad,” Mourinho said when presented as Tottenham manager.

Not when he sees his defense keep only one clean sheet in 12 matches since he took over. Or a midfield that appears to have none of the traits — dynamism, control — Mourinho has always desired. Or when he sees the injury bulletins this week which ruled out Moussa Sissoko and, more crucially, captain Harry Kane until April.

All this ahead of the visit to Tottenham Hotspur Stadium this weekend of a team Mourinho might hate losing to more than anyone else. Liverpool, the leader by 13 points and still unbeaten after 20 games could leave Mourinho in an even worse position by Saturday night.

The “last wonder of the world” — as Mourinho cuttingly once described Liverpool’s devastating strikeforce — looks in ideal shape to cut Tottenham further adrift of the Champions League qualification positions. Spurs, in sixth place, are currently six points behind fourth-place Chelsea, which has a much easier game this weekend, at home to struggling Burnley.

Here is a look at the issues facing Mourinho at Tottenham:

The serious hamstring injury to Kane doesn’t just rob Mourinho of his top scorer, it deprives him of a presence up front that he so likes. Think of the kind of strikers who have excelled under Mourinho — Didier Drogba, Diego Costa, Zlatan Ibrahimovic. Big men who can hold the ball up and lead the line. Kane has that side to his game, too, even though he has tended to drop deep in recent seasons, maybe to show he has an all-around game and maybe because his string of injuries has affected his mobility. Son Heung-min and Lucas Moura, who typically play as wide forwards, will be makeshift strikers for the next three months. They couldn’t be further from Mourinho-style strikers. It’s no surprise to see Tottenham linked with AC Milan striker Krzysztof Piatek, even though Mourinho reportedly was told when he joined that there was no money available until the offseason.

Given Mourinho’s pedigree for managing teams with stingy defenses, this was widely thought to be the department of the team that he would have the biggest impact. Yet under Mourinho, Tottenham has only had one shutout — the 5-0 win over Burnley on Dec. 7. Mourinho realized right back was an issue, so has played Serge Aurier in a more attacking role on that side and mostly deployed center back Jan Vertonghen as a left back who rarely ventures forward. At center back, he started with Davinson Sanchez alongside Toby Alderweireld but has recently dropped the Colombian and sometimes started midfielder Eric Dier in the center of defense. Whatever he has tried, it hasn’t worked. Alderweireld, who recently signed a new deal, might be the only player retained when Mourinho molds a new defense. Having to play error-prone back-up goalkeeper Paulo Gazzaniga in the absence of the injured Hugo Lloris hasn’t helped, either. Mourinho said Friday that Lloris should be back by the end of the month.

Central midfield is perhaps Mourinho’s biggest problem area, which says a lot considering the defensive issues. He doesn’t seem to trust Harry Winks, Ndombele cannot get fit, Sissoko is now injured and has rarely played centrally under Mourinho, while Dier’s return to midfield — after being mostly overlooked by Pochettino — has only served to show how off the pace the England international is these days. Mourinho might need a completely new central midfield when he attacks the transfer market in the offseason. Then, further forward, long-time playmaker Christian Eriksen has lost his way and looks destined to leave either in January or when his contract expires after the season, while Giovani Lo Celso is still settling after an injury-affected first few months at the club since joining from Real Betis on loan in August. In short, the midfield is a mess.

Given the circumstances, Liverpool is the last team Mourinho would want to take on next. Last week, he called the Reds “the best team in the world at this moment,” and highlighted the benefits of Liverpool letting Jurgen Klopp have eight transfer windows to “put down his philosophies, his training methods, his fingerprints.” Mourinho was a picture of smugness after his Man United team kept Liverpool scoreless at Anfield with 35% possession in October 2016, while his patched-up Chelsea team beat Liverpool in April 2014 as a result that ruined the Reds’ bid to win the Premier League title. How he would love to be the manager to end Liverpool’s unbeaten record this season, however unlikely that seems.