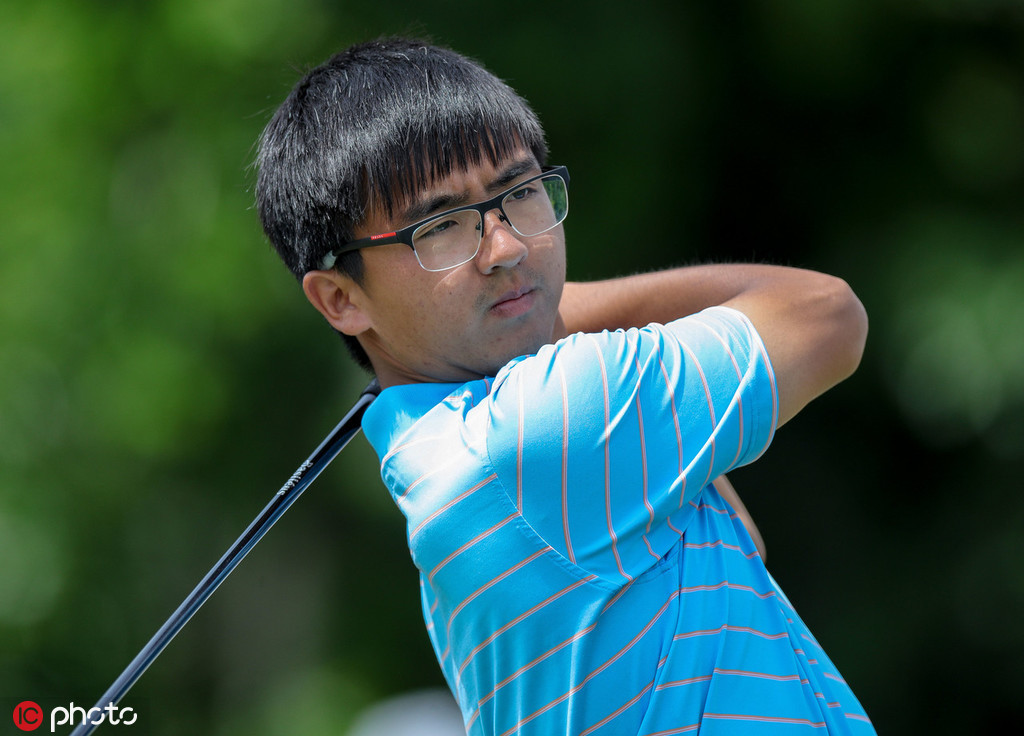 Dou Zecheng watches his drive from the 7th hole during the second round of the Zurich Classic of New Orleans golf tournament at TPC Louisiana, in Avondale, Los Angeles, US, on April 27, 2018. (File photo: IC)

Such is his attitude towards life that Dou Zecheng is the kind of player who is more likely to see his golf ball as being in the middle of the fairway rather than in an unlucky divot.

The rising young Chinese star has been to golfing heaven and back over the past three seasons, but remains undeterred after narrowly missing out on a quick return to the PGA Tour via the Korn Ferry Tour last term.

Dou, who turns 23 in January, finished 28th in the Korn Ferry Tour regular-season points list, which was an agonizing three rungs short of earning a PGA Tour card.

What may have stung more was the fact that he won the season-opening tournament, The Bahamas Great Exuma Classic at Sandals Emerald Bay, and sat comfortably inside the top 25 for most of the year.

Inexplicably, from the joy of winning his second Korn Ferry Tour title, Dou's fortunes took a drastic dive, missing 15 cuts over his next 23 starts to kill his PGA Tour dream for another season.

"A lot of media have been asking me the same question," said Dou.

"Although it was up and down, I see it as a successful year. I didn't see it as a failure although I ended up not getting the card.

"If I hadn't have played good in the Bahamas, I could've been back playing in China as I didn't have full exemption on the Korn Ferry Tour. Winning was a good thing."

Dou is preparing to resume the grind on the Korn Ferry Tour, which he views as a perfect platform to hone his skills.

His record of four cuts from 23 starts during his 2018 stint on the PGA Tour told him he simply wasn't good enough to compete at that level.

"I don't want it to happen so fast. If I get my card back, it's like maybe too fast. I want to take it slowly. Maybe slow and steady wins the race," he said.

After the dust settled on his 2019 season, Dou reviewed all his hard work with coach Cameron McCormick, who also works with Jordan Spieth. For work ethic, Dou gave himself full marks.

"When I played on the PGA Tour, I didn't spend enough time doing what I needed to do. And then coming out with a win in early 2019, I kept working hard and focused on my fitness. I might play around 20 events in 2020 and see how it works out. I played a lot in 2019 and at one stretch played 14 of 15 weeks and maybe that got to me."

Dou is working with McCormick in Dallas, and said their association is already yielding results.

"He introduced this fitness program, so I now go to the gym three times a week. My body started feeling really good and we're making changes in my game, focusing on my swing plane with the aim of creating more consistency with my ball striking and putting.

"I see Cameron once a week now which is good and there's not a day at home where I don't have anything to do. I'm always working on something, trying to get better all the time."

Dou has an opportunity to get this year's campaign off to a flier with his title defense in the Bahamas. "I feel good with my game. I finished second twice on the China Tour and I had three good rounds at the WGC-HSBC Champions. I feel confident about getting my PGA Tour card," he said.

But while Dou, who hails from Henan province, is enjoying his golfing education in the US, he admits that being far from home can be tough at times.

"Living in Dallas, golf is the biggest thing. There are good courses, good coaches, good players around you, which is big," he said. "However, being Chinese out here, the hard part is you think about your family all the time. It can be tough if you're not doing well and it can get hard."

The writer is senior director of communications for the PGA Tour and is based in Kuala Lumpur.