The first edition of the official guidebook concerning epidemic prevention of the 2022 Beijing Winter Olympics was released on Monday, as Beijing strives to control sporadic COVID-19 cases as winter approaches. 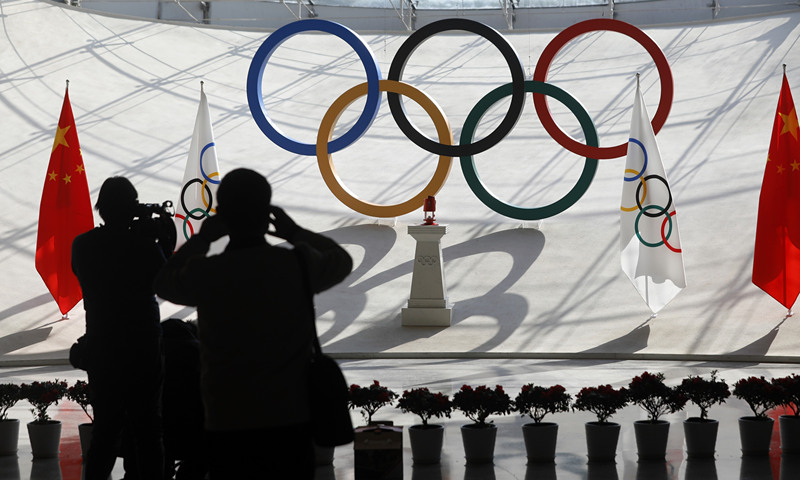 China will mark the 100-day countdown to the Winter Olympics on Wednesday. The city reported four new COVID-19 infections on Monday, bringing the tally to 23 in the latest surge in October. The guidebook came at a timely moment, explaining how China is going to protect the safety of its residents and foreign guests.

According to the guidebook, all athletes are encouraged to get vaccinated. Vaccinated athletes, as well as a small number of athletes and accompanying team officials with medical exemptions, can have access to the closed-loop management upon entry.

Those who complete two-dose vaccination courses within 14 days before coming to China will enter the closed-loop management system directly after arrival. Those who were not fully vaccinated shall be quarantined for 21 days after arrival.

The closed-loop management system, which has been applied in China's 14th National Games in Northwest China's Shaanxi Province, covers all venues related to the Winter Olympics, including sites for transportation, accommodation, catering and competition.

"Closed loop" means the venues are separate from the general public, and venues in the loop will be connected by designated vehicles. People's needs within the closed loop will be satisfied, said Wang Quanyi, an official from the health and service department of the Beijing organizing committee.

Wang Quanyi said that the guidelines are an instruction manual for those attending.

"It tells everyone who is coming to the Olympic and Paralympic Winter Games how they should come, what they will be like when they arrive, what materials they need to prepare, and what codes of conduct they should follow during the Games," Wang said.

"The guidebook gives top priority to the safety and health of athletes and other participants as well as the Chinese public. It draws on the experience of other major sports events around the world and incorporates China's epidemic prevention policies," Han Zirong, vice president and secretary general of the Beijing Organizing Committee for the Winter Games, told the media on Monday.

Some experts said measures like vaccine requirements and closed-loop management show China's great sense of responsibility as a host and major country.

Wang Guangfa, a respiratory expert at Peking University First Hospital, told the Global Times on Monday that epidemic prevention for the 2022 Beijing Winter Games is a challenge for the nation's overall anti-epidemic efforts, as the arrival of the foreign delegations will coincide with the winter season, when the virus is believed to be more active.

However, the expert said that vaccinations and 21-day quarantines cannot fully guarantee "zero infections." But as long as there is no large-scale outbreak, "it can be said that our epidemic prevention is a success."

Wang suggested that the Beijing organizers should strengthen prevention measures in other ways, such as having Olympic participants take nucleic acid tests more often, as well as real-time health monitoring, disinfection of venues and isolating spectators from athletes.