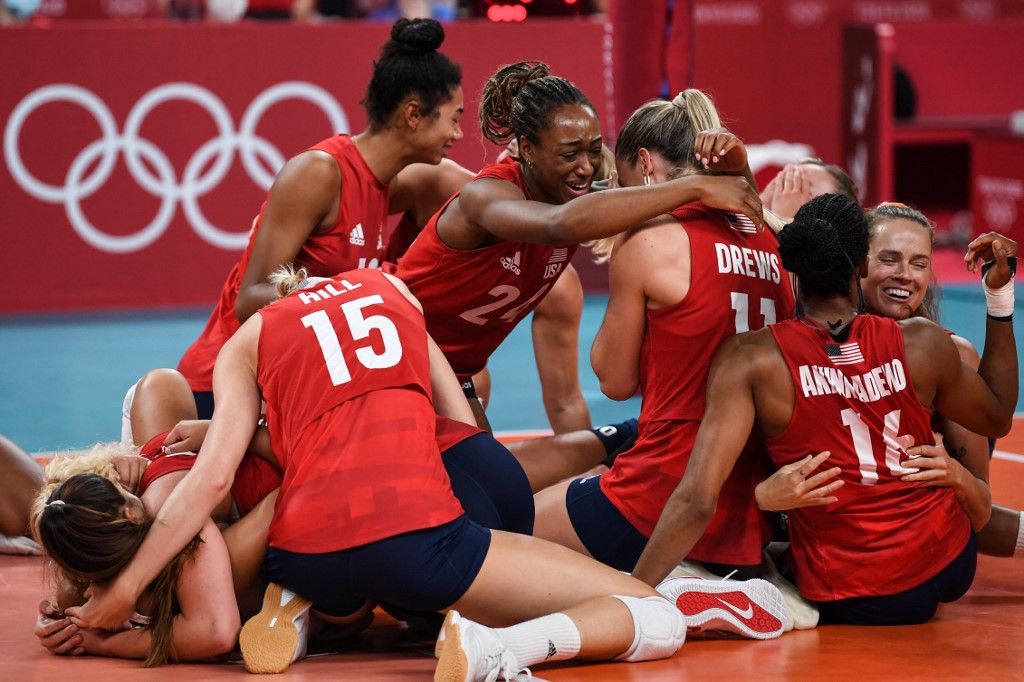 USA's players celebrate their victory in the women's gold medal volleyball match between Brazil and USA during the Tokyo 2020 Olympic Games at Ariake Arena in Tokyo on August 8, 2021. (Photo: AFP)

"I am so happy for this team and these amazing women in this programme. They are now gold medalists," said USA head coach Karch Kiraly, who was the only player (man or woman) to have won Olympic gold medals in both the indoor and beach volleyball categories.

"It's a great day to have a gold-medal day," said American Haleigh Washington. "It's a lot more wet than I had anticipated, but it's everything we wanted it to be. The hard work we put in, the sweat, the tears, the blood - it's been worth it. I am so proud to have done it with this group of women. I am so honored."

Having swept Serbia 3-0 in Friday's semifinals, the United States jumped to a 15-11 lead in the first set. After Brazil pulled within 15-14, the Americans pulled away again on back of two spikes of Jordan Larson and two errors of Brazil, and held on for the victory in the opener.

In the middle of the second set, the United States staged an amazing 8-1 run for an 18-9 lead. Brazil fought hard to cut their deficit to 22-19, but that was the closest they could go. In the third set, the American women raced to a 17-9 lead and never looked back.

Andrea Drews led the United States with 15 points, with Michelle Bartsch-Hackley and Larson adding 14 and 12 respectively.

"We have been vulnerable, worked through hard things, and had hard conversations. Everyone made changes for the common goal in mind and that was gold. I am really proud of how we adjusted in the past five years to get us here, and I think that teamwork makes all the difference," said Drews.

Playing without Tandara Caixeta, who had been provisionally suspended for potential anti-doping rule violation, Brazil was led by Fernanda Rodrigues' 11 points.