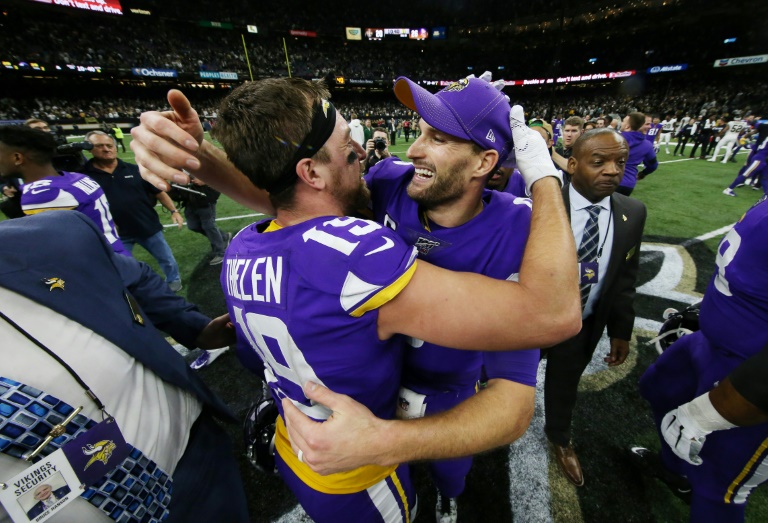 Minnesota's Kirk Cousins threw a 4-yard touchdown pass to Kyle Rudolph 4:20 into over-time Sunday and the Vikings upset New Orleans 26-20 to reach the second round of the NFL playoffs.

The Vikings quarterback achieved his first career playoff victory by marching Minnesota 75 yards in nine plays, sparked by his 43-yard completion to Adam Thielen to the Saints 2-yard line three plays before the winning touchdown throw.

Minnesota's Dalvin Cook ran 28 times for 94 yards and two touchdowns for the visiting Vikings, who will travel to National Conference top seed San Francisco next Saturday.

New Orleans quarterback Drew Brees, 10 days shy of his 41st birthday, completed 26-of-33 passes for 208 yards and a touchdown but costly turnovers foiled the favored Saints.

"I'm so proud of the way we fought," Rudolph said. "Nobody gave us a chance to win today but us."

Cook's 1-yard touchdown run with 3:23 remaining in the third quarter capped an eight-play, 64-yard march to give Minnesota a 20-10 lead.

But the Saints answered with an 85-yard drive in eight plays, which ended on a 20-yard Brees touchdown pass to Taysom Hill with 10:31 remaining, pulling New Orleans within 20-17. Brees went 5-for-5 passing for 71 yards in the scoring march.

Brees moved the Saints downfield again but Jamaican-born Danielle Hunter of the Vikings knocked loose a fumble, Brees's first of the season, and Minnesota's Jalyn Holmes recovered with 4:18 remaining.

Saints defender A.J. Klein appeared to have recovered a Cook fumble and returned it for a touchdown on the next Vikings possession, but a video review overturned the play, ruling Cook was down before losing the ball, keeping Minnesota ahead.

New Orleans had a final chance in regulation time and Wil Lutz kicked a 49-yard field goal with two seconds remaining to pull the Saints level at 20-20 and force over-time.

At Philadelphia, the Eagles suffered a major setback when quarterback Carson Wentz went out in the first quarter after taking a helmet-to-helmet hit from Seattle's Jadeveon Clowney.

Josh McCown, a 17-year NFL veteran who had retired and worked as a TV commentator before returning to the Eagles at age 40, made his playoff field debut by replacing Wentz, who missed the end of Philadelphia's two prior campaigns after knee and back injuries.

A 5-yard touchdown run by Seattle's Marshawn Lynch with 66 seconds remaining in the second quarter lifted the Seahawks to a 10-3 half-time lead.

Seattle's Jason Myers had kicked a 49-yard field goal to open the scoring but Jake Elliott answered with a 46-yard kick for Philadelphia.

Elliott added a 26-yard field goal on the first Eagles drive of the third quarter but the Seahawks answered when Russell Wilson connected with D.K. Metcalf on a 53-yard touchdown pass to give Seattle a 17-6 advantage.

"We stayed consistent. We answered the call," Wilson said. "More than anything else we believe -- there's no doubt in us."

Elliott added a 38-yard field goal later in the third quarter but the Eagles failed twice on fourth downs deep in Seattle territory in the fourth quarter to surrender the ball and Seattle ran out the clock to seal the victory.