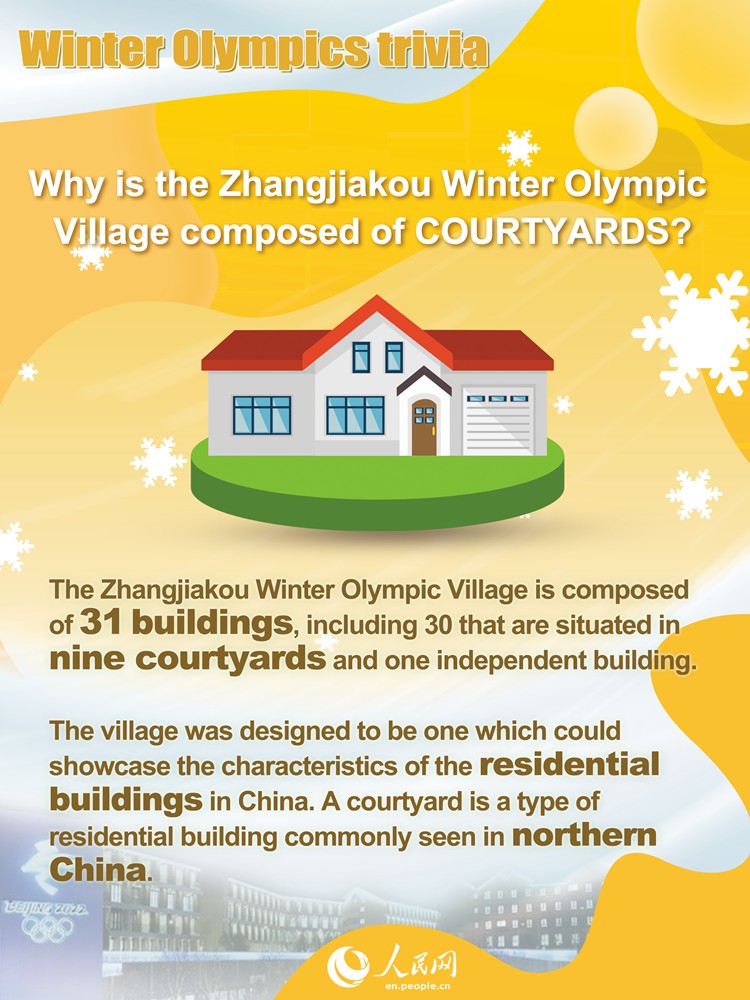 Located in the Taizicheng Resort in Chongli district, Zhangjiakou city in north China's Hebei Province, the Zhangjiakou Winter Olympic Village is 0.5 km from the Taizicheng Railway Station. The Olympic Village is composed of 31 buildings, including 30 that are situated in nine courtyards and one independent building. Each of the courtyards has three to four buildings in it.

Wang Hao, who is an architect with the Architectural Design and Research Institute of Tsinghua University Co., Ltd, introduced that during the design process, they wanted the Olympic Village to be one which could showcase the characteristics of the residential buildings in China, especially in northern China.

A courtyard is a type of residential building commonly seen in northern China. Whether it's the quadrangle courtyard, also called "Siheyuan" in Chinese, or rural courtyards, the Chinese people regard the courtyard as an important part of the heritage that defines their living spaces. To implement this design philosophy, the architects adopted the unique elements of courtyards when designing the Zhangjiakou Winter Olympic Village.

Furthermore, the designers also drew inspiration from the poem "Ode to Sports" by Pierre de Coubertin, father of the modern Olympic Games, applying a different theme to each of the courtyards, with the themes ranging from justice, courage, honor, joy and peace. The plants and sculptures seen in the courtyards are embodiments of the poem. Each courtyard in the Olympic Village highlights the profoundness of Olympic culture.