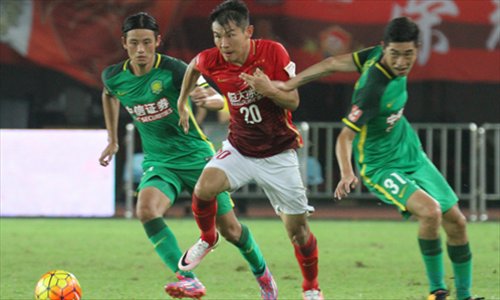 Liu Yi, secretary general of the CFA, said in a speech at the workshop that the problem with Chinese football lies in its leagues, which lack a "comprehensive, systematic and long-term" design, resulting in the leagues' failure to cultivate talent for the national team.

The CFA launched a range of new policies on December 31, 2019 following public anger about China's 2-1 defeat to Syria in a 2022 FIFA World Cup qualifier in mid-November and the resignation of head coach Marcello Lippi.

The new policies are aimed at regulating the domestic leagues in terms of business development and boosting the competitiveness of the national team, said Liu. Amid the new policies, salary caps and development of young talent are primary among the fans' concerns.

According to data from transfermarket.com, the overall value of the Chinese Super League - which is based on spending and running costs - is 393 million euros ($436 million), while the number for South Korea's K League 1 is 161 and for Japan's J League1 it is 365 million.

Liu said that the CFA wants domestic clubs to limit their spending on expensive foreign big names, as about 60 to 80 percent of CSL clubs' budgets are typically spent on foreign players and their salaries.

According to policy, the post-tax annual salary of foreign players who signed contracts after 2020 January 1, shall not exceed 3 million euros.

Salaries of young players will also be restricted and shall not exceed 300,000 euros (pre-tax). Liu told the media that the move is aimed at encouraging young footballers to play hard and prove that they deserve a better salary.

"It is also helpful for young players to have more frequent transfers and find a suitable club that guarantees enough appearances," said Liu.

To maintain the seriousness and continuity of the policy, Liu disclosed that the CFA will work with the upcoming "professional league council." The CFA will focus more on the national team and the youth academy, while the council will handle the daily operation of the professional leagues.

Representatives from the CSL, The FA, the Premier League and the City Football Group attended the workshop. Discussions were held on issues such as the healthy and balanced development of the league, financial fair play and the protection of the property rights of academy players.